I have finally embarked on the journey of learning to use a pattern.  Sewing pattern that is.  I bought a fabulous book, with many fun projects to plan for…but the first one I jumped into was the Yoga Mat Bag.

Handy as I always find myself with too many things in my hands, no pockets to speak of (the one and only downfall of comfy yoga pants) and fumbling to carry my mat…when I’m supposed to be calm and serene and looking like one of the yoga fanatics from the Athleta catalog. 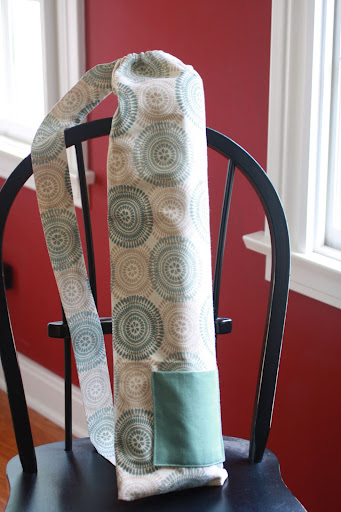 This first bag was made for a friend.  I used home decor weight fabric which is a little heftier and sturdier.  The pocket is great for keys and chapstick and the drawstring keeps everything secure.  The strap is long enough to use across your body if you are riding your bike to yoga.  It seems like such a simple project, and it is…but there are key pieces of information that lurked in the pattern…like pressing the seams open, or sewing on the pocket first before sewing up the side of the bag…and as it turns out those bits are what make all the difference! 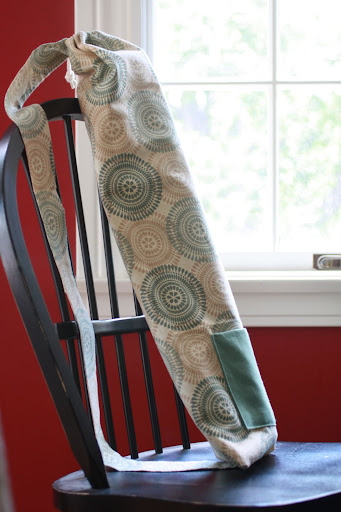 I have since made a second and larger one for a friend who happens to have the cushiest and stickiest yoga mat around – so a little extra fabric was in order.  Putting your yoga mat back in the bag should be like putting on pantyhose that are a few sizes too small!  I still think that patterns are somewhat hard to read, and are open to interpretation…but perhaps that is the challenge…otherwise, everyone would make their own yoga bags!

We’ve been getting some visitors lately.  First there were these guys… 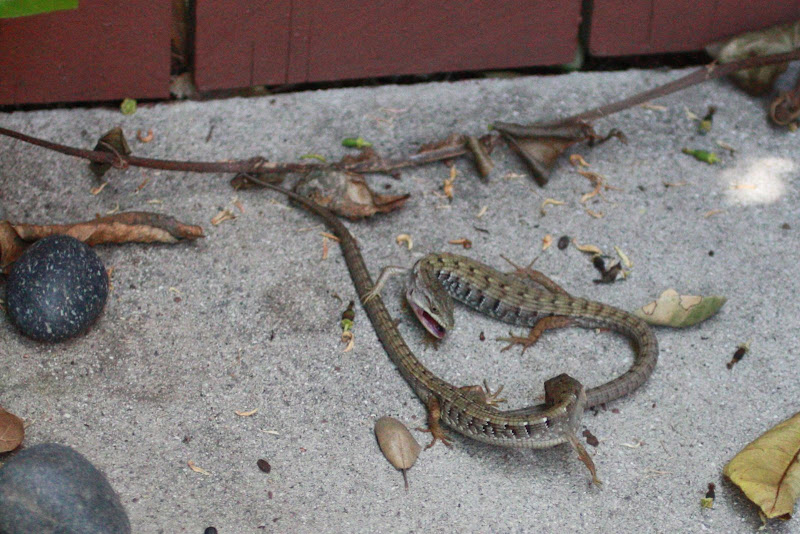 Behind our garage, there is a little piece of concrete and I went back there to explore one day when Cleo refused to come when I called…I’m glad she didn’t try to eat them! 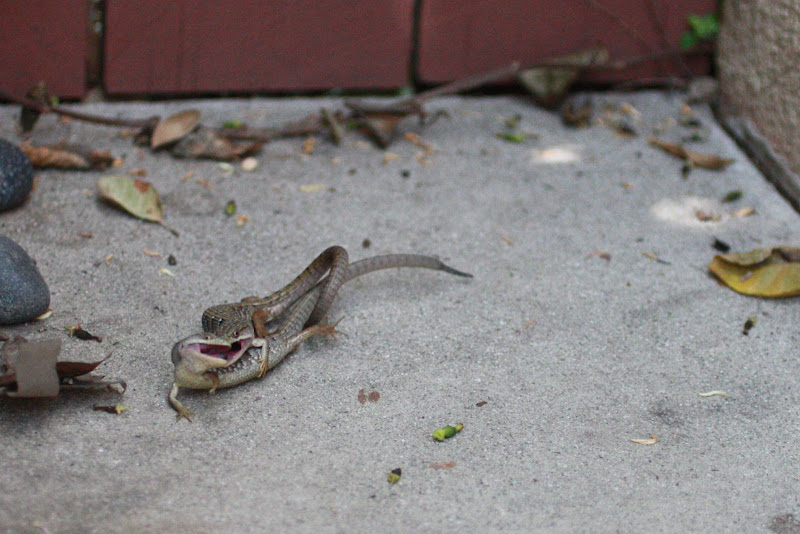 Surprisingly vicious, writhing, twisting and biting each other.

Then, just last week, Woody had just arrived home from Indonesia (story for another time), and Cleo was on the back porch.  We keep the gate closed with a bungy cord as the metal is bent and the latch doesn’t work anymore – anyway, Cleo managed to jump the gate or push through it somehow and fling the bungy to run after something.  Woody heard her barking – which she never does…ran outside with a flashlight to find her behind the garage in full pointing mode staring into the darkness at this creepy critter…

Don’t immediately recognize it…it’s a possum, and a large one at that!  Woody would like me to point out the drool drips underneath the possum’s chin.  Once again, very pleased that Cleo didn’t consider this an evening snack and was most likely upset that she did such a good job pointing, and yet Woody didn’t do any shooting!  (isn’t that how this whole thing works…?)

Just yesterday morning, I walked out the back door into a spider web…I hate this feeling.  Knowing that you have strands of web around you, and you can’t seem them, and who knows where exactly the spider who these strands belongs to is located at that very moment.  Upon coming home from work, as I unlocked the door, I glanced at the light fixture and realized that right inside it was a young black widow spider.  Here we go again. 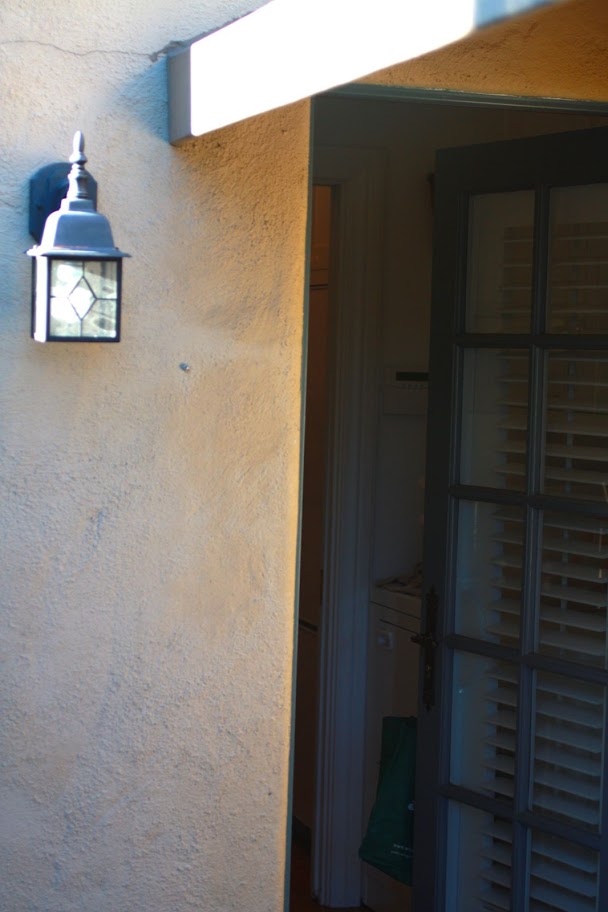 This is our back door. 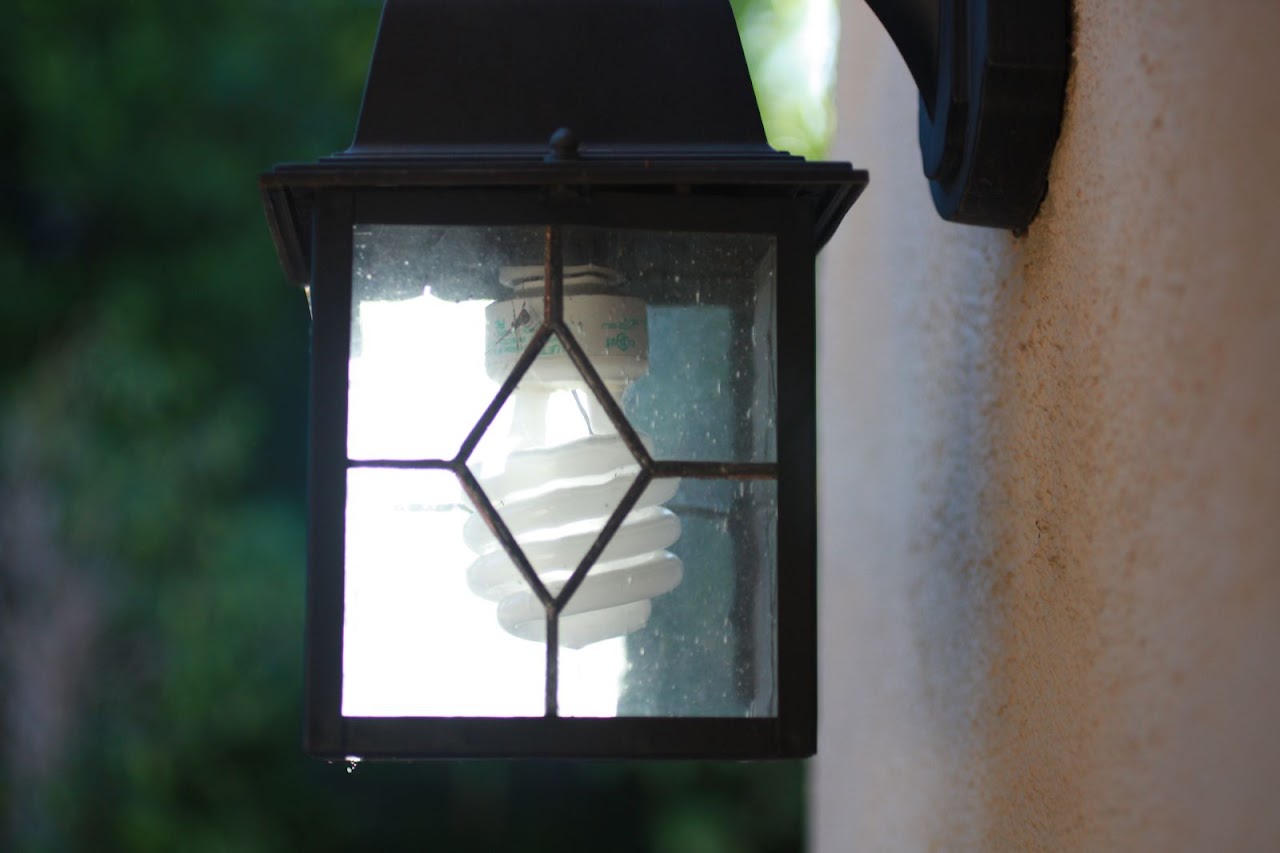 This is the light next to our back door…and that little spot in the upper left panel is an unwelcome house guest! 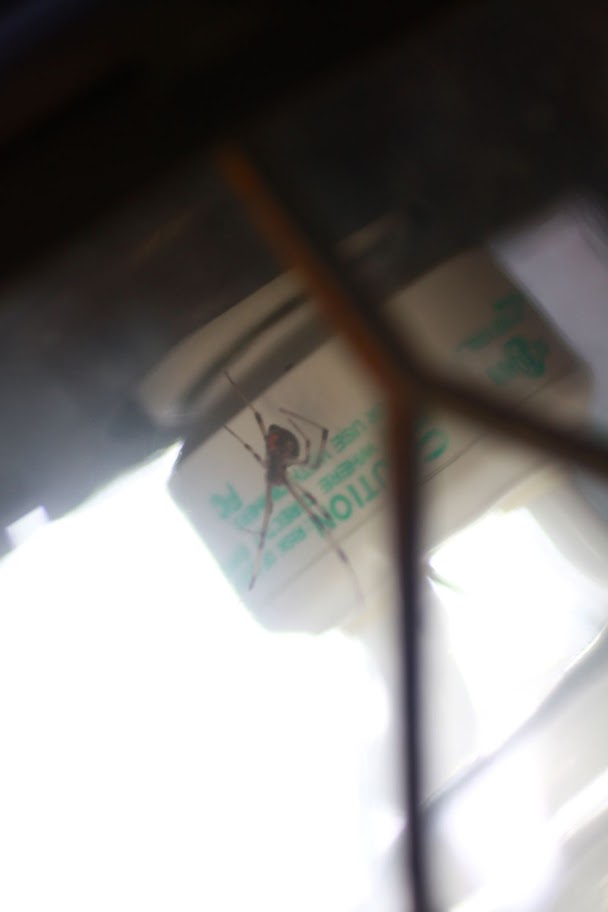 My breadth of experience with Black Widows is broadening by the month…and I now know enough to identify this as a fairly young female black widow.  The bodies of black widows darken as they mature, which is why her legs appear almost striped and her abdomen is not jet black yet.  I sprayed a completely natural insecticide that works using concentrated essential oils from cinnamon, rosemary and clove.  Once I sprayed it (can indicates that it is very effective on ants, roaches, silverfish, etc.), the entire patio smelled like bad potpourri on steroids.  In fact, it was so strong, my eyes were burning and nostrils were stinging.  I think this stuff could work as a substitute for bear spray!

A racoon family problem!  Mom is up there with at least 3 offspring.  They look pretty cute…but their scratching, pitter-patter in the attic and across the roof was not. 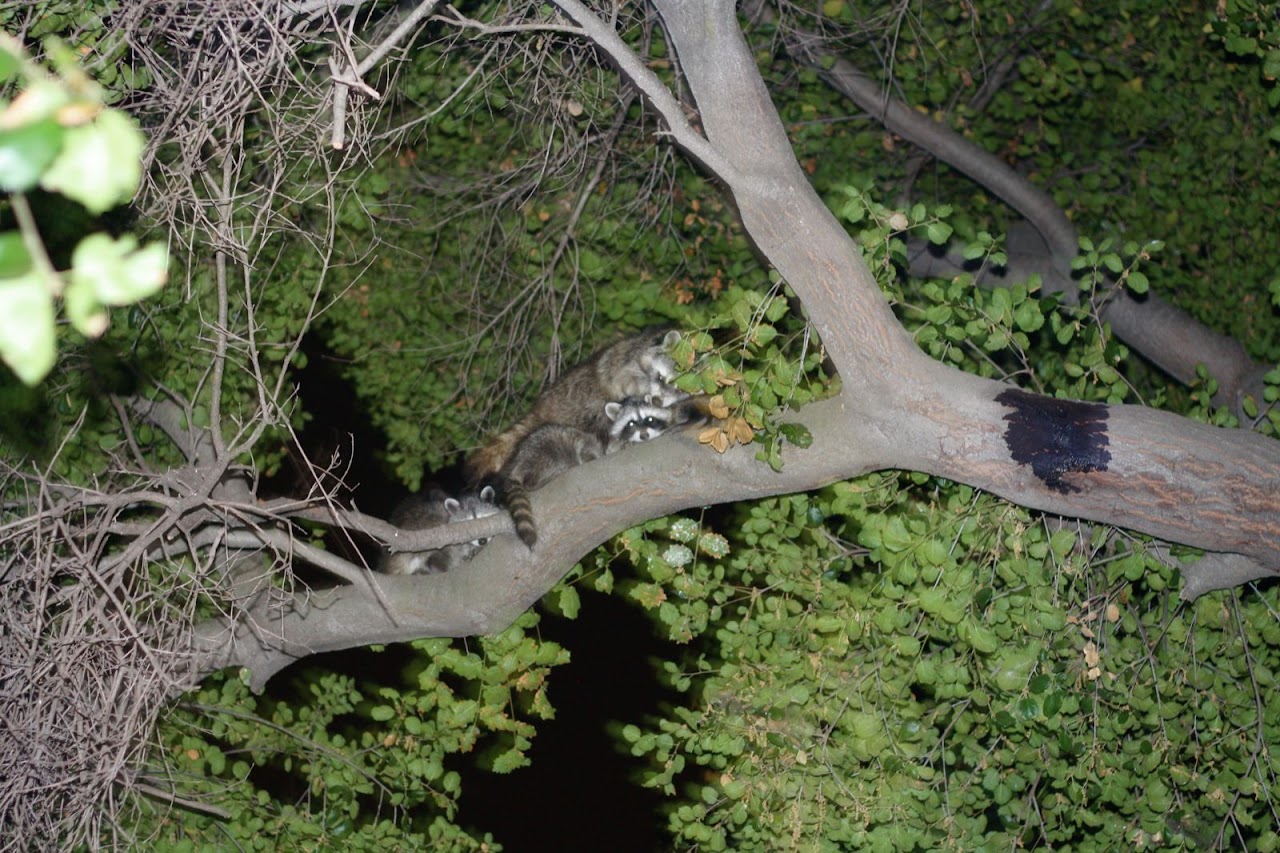 There are many babies in my world…and that means baby gifts as well.  As I’m not a mother myself yet (only a dog mother to Cleo), I’m not completely schooled in what would be the most helpful things to have around…and I think they vary depending on what number baby the mom is having…is this her first…or is it just another ride on the rollercoaster?  So I’ve used my ignorance as an excuse to try making some baby things…

These did not turn out exactly like I expected…but, hey, room for improvement next time, right…? 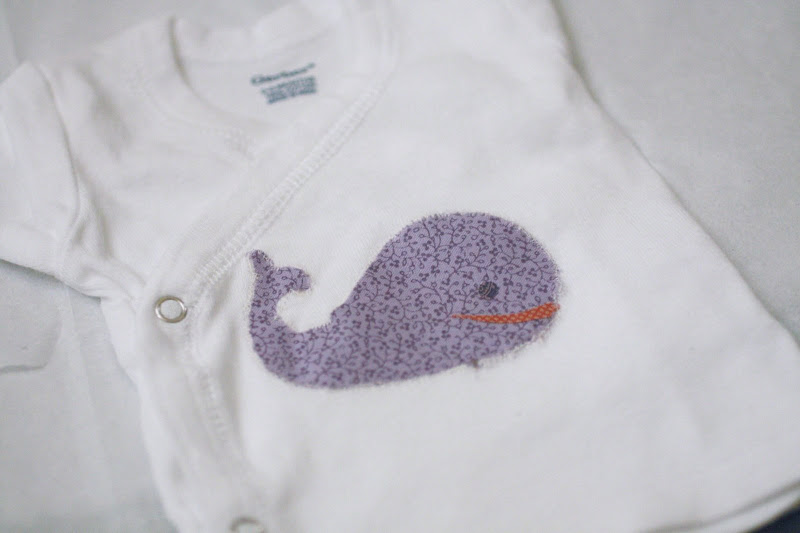 I tried to stitch around the outside after using an adhesive backing to get the cut out to stick onto the fabric.  Guess what…?  Sewing machines and adhesives are not friends.  After thinking about it, it’s better to not have any threads poking through the shirts as it could irritate new little baby skin! 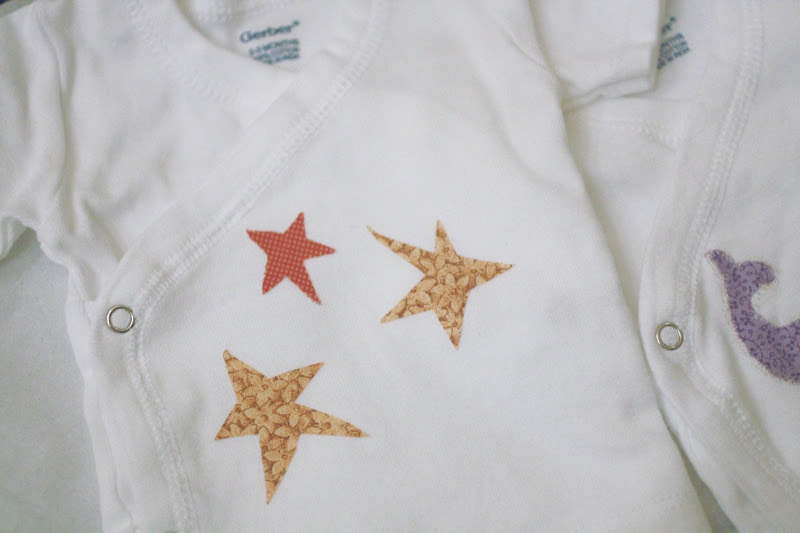 Stars were cute, although surprisingly difficult to cut out.  But here is my favorite! 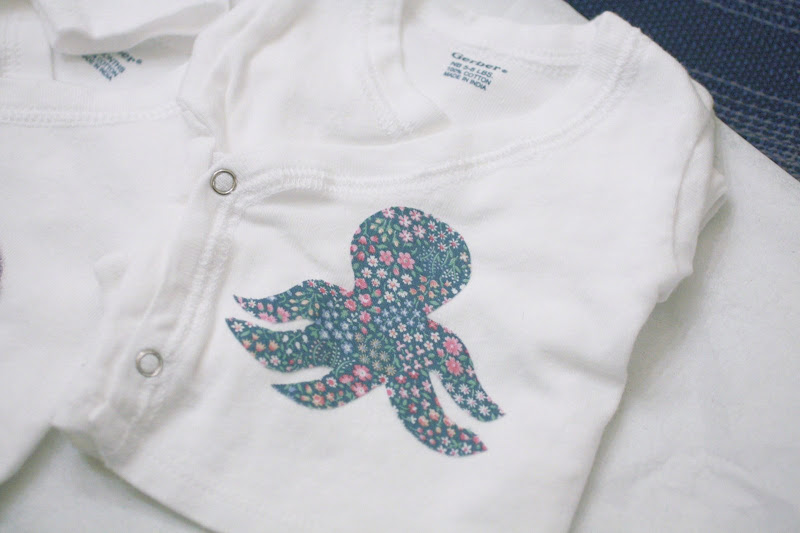 I found images and silhouettes that I liked online and printed them out, cut the shape out, traced it onto a manila folder (which is a good thickness and a little stiffer than printer paper) and then cut that out and used it as a template to then trace onto the fabric…which I then cut out after adding the adhesive fabric sheet to the back of it.  I am sure that probably 18 of those cutting, and tracing steps could be eliminated, but at least it worked! 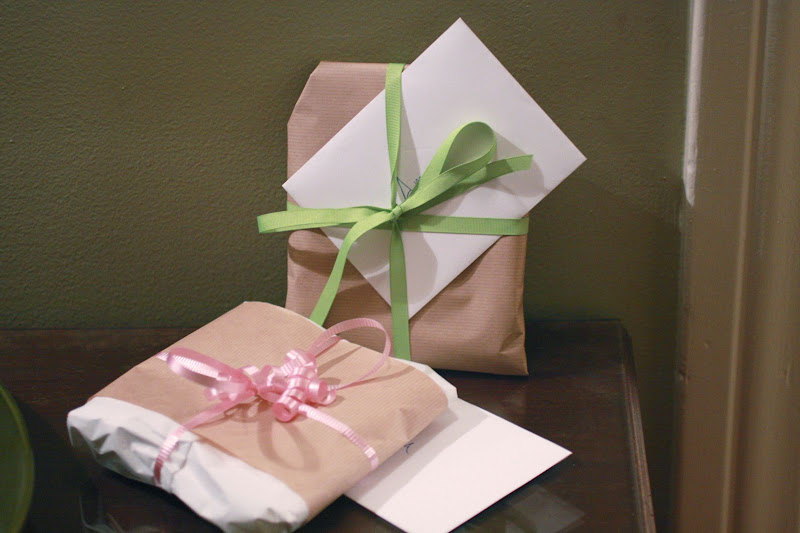 I wrapped them up and headed straight to a baby shower the next afternoon!  Whew!  Just in time!

Blogs I can't help but read...

© All content and photographs are exclusive property of Gentry Fischer 2010.